| JUS - 2005 - 3
Anno: 2005
The article offers some reflections about the role of independent regulatory authorities in European and in national context, with special regard to the regulation of the concurrence. Attention is given to the problem of the judicial review on the acts of the authorities. The thesis is that many technical problems are competence of the authorities, instead of legislature. It is explained the jurisprudence of the Consiglio di Stato about hard and soft control on authorities' acts, but it proposes the idea that, above all, it is a matter of evidence in supporting those administrative acts.
€ 6,00
Il diritto naturale e la storia. L'affermazione della libertà di coscienza nello Stato democratico digital 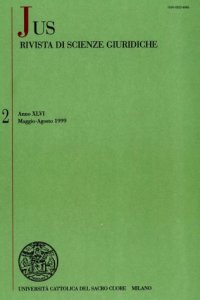