di Anna Casella Paltrinieri
Anno: 2009
This paper aims to report a resistance process that was carried on by black quilombolas community (slave descendant) in the Alcântara region (Maranhão-Brazil). These communities have been in contrast through the times with the military institutions which ordered them to leave their traditional lands. Basing themselves on the international, federal and national legislation, and rediscovering their cultural ethnic heritage, and economic specificity, the different communities have carried on experiences of community opposition and cohesion, of political association, and have introduced new identity pronouncements, on which they have built their social and cultural ransom paths, as well as those of leadership recognition. The theme offers the opportunity to discuss some political anthropology issues, such as identity politics, the concept of power, and the social relationships.
€ 6,00
Mercati del Mozambico. Persone, beni e cultura nei mercati rurali di Sofala e Cabo Delgado 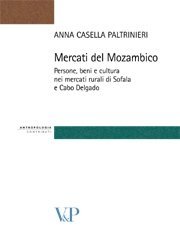