di Elena Dominique Midolo
Anno: 2007
The flows of symbolic material circulating on the cultural horizon of contemporary Great Britain are shaped as constant and continuous exchanges that go beyond the borders of the nation state. The role of mass media is crucial in the definition of the relationship between local and global dimension and contributes to the construction of individual experiences. The study of Popular Music production and consumption habits allows us to draw a map of the routes of such translocal flows. This article looks into the flow of sounds that characterize the experience of Muslim BrAsian youth in post-7/7 Great Britain. What is the role of music, and in particular of rap music, in the experiences of young Muslim of Asian background living in the suburbs of the former capital of the Colonial Empire? What are the poetics defining the paradigms of production and consumption of a contested music genre such as Islamic conscious rap? What kind of politics does it put forward? This article tries to listen to a syncretic and transdiasporic form of communication and cultural representation such as Islamic conscious rap, analyzing the new BrAsian identities characterizing post-colonial Great Britain.
€ 6,00
Sound Matters. Orizzonti sonori della cultura contemporanea 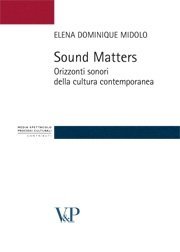