‘’Like me’’. Mimesis and Dramaturgic Play in Early Childhood digital 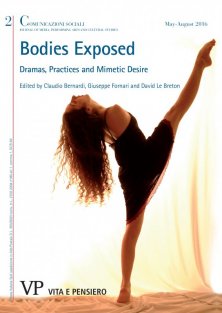 | COMUNICAZIONI SOCIALI - 2016 - 2. BODIES EXPOSED Dramas, Practices and Mimetic Desire
Anno: 2016
Mimesis is an innate feature of human beings. It manifests immediately after birth and constitutes a very early form of learning, substantiating interpersonal relationships, fostering empathy, and facilitating self-awareness, together with many practical and operative notions, through mirroring oneself in the significant other. The mimetic dimension evolves into fictional and symbolic ludic forms, which we have called dramaturgic, and which constitute a crucial socio-relational and cultural resource in infants’ development...
€ 6,00
Non solo teatro. L’esperienza identitaria nel percorso di teatro sociale del gruppo ‘Nonsolomamme...’ (Vimodrone, 2004-2008) digital 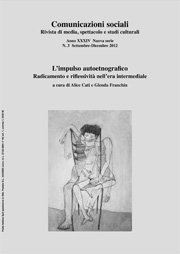 | COMUNICAZIONI SOCIALI - 2007 - 3. Comunità in atto. Conflitti globali, interazioni locali, drammaturgie sociali
Anno: 2007
From the second half of the century, the history of theatre in Italy has been built around the concept of Theater as a public service. Through the foundation of the Teatri Stabili, the Italian society has put the focus of attention on the value of theatre as a cultural public service, addressed to the greatest possible number of citizens. This concept was criticized, from the end of the 1960s, by an entire political and social movement, claiming for the possibility of a self-managed culture, as an enhancement not only of fruition of these instruments, but also of production. The 1970s became in this sense the years of the greater experimentation of a new political and social value of theatre. They are the years of theatrical animation, decentralization, basic groups, theatrical cooperatives, group theatre, avant-garde Theatre, and of both aesthetic and ethical communities. The text reconstructs this development trying to highlight the problems which determined the failure of a revolutionary vision of theatre, trying to identify which of its lines survived in the following decades. It also highlights which experiences could be meaningful today, in an historical moment in which it is urgent to think of culture and art as occasions of social cohesion and communitarian reinvention.
€ 6,00