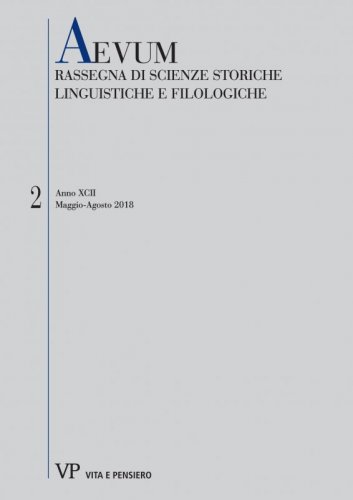 | AEVUM - 2018 - 2
Anno: 2018
The codex Taur. B.V. 33 (Pas. gr. 179) was written by three scribes whose handwriting can be dated in the second half of the XV century. The main copyst is the same who transcribed ff. 218r-284r of Par. gr. 2153, a miscellaneous codex written by a several scribes probably in Mistra in the XV century...
€ 6,00
Per la tradizione di Temistio nei secoli XV-XVII. I codici recentiores delle orationes Augustales digital

| AEVUM - 2011 - 1
Anno: 2011
SUMMARY: Twelve later manuscripts (recentiores) of six speeches of Themistius (orationes II, IV, V, VII, IX, X) derive from a lost common ancestor (omega). Description and collation of the MSS are provided and a stemma codicum is given. The lost ancestor omega is identified with a composite MS, probably written in the 14th century, formerly in the library of the Escorial, where it was destroyed by fire in 1671; a previous owner was Diego Hurtado de Mendoza, ambassador of Charles V in Venice (1539-1546). Janus Lascaris saw omega in Corfu in 1491, when it was in possession of Dimitrios Trivolis, a well known Greek copyist. Lascaris described it in his notebook Vat. Gr. 1412 and had Themistius copied. This copy, Par. Gr. 2079 (late 15th century), the oldest of the twelve recentiores, was not only owned by Janus Lascaris, but shows several marginal notes in his hand. A MS of the same family lies behind the editio princeps, printed by Henricus Stephanus (1562). In 1605 Georgius Remus, a jurist, prepared the first Latin translation of the six speeches and called them orationes Augustales.
€ 6,00
Ricerche sulla tradizione manoscritta delle Orazioni di Temistio digital

| AEVUM - 2010 - 2
Anno: 2010
Themistius orationes IV-V-VII-IX-X are transmitted by the MS tradition in this succession and appears to have been a corpusculum of late antique origin. The text of or. IV has been collated in all the extant witnesses (twenty in number); a selective collation has been carried on for orr. V-VII-IX-X. A description of the medieval manuscripts is provided and their relationships are estabilished. All the Renaissance MSS (twelve in number) are demonstrated to derive from a lost ancestor (W). Hence a stemma codicum is drawn, where the medieval MSS and omega find their place.
€ 6,00
Contributi al testo delle epistole di Massimo Planude digital