| AEVUM - 2012 - 3
Anno: 2012
SUMMARY: The library built in the mid-15th century by the Lord of Cesena Malatesta Novello still preserves 343 manuscripts. 126 out of these codices were copied and illuminated for him. The activity of the Malatesta scriptorium covers a period of about twenty years, from 1446 to 1465, when Novello died. This corpus, consisting of manuscripts written in a relatively short period, and commissioned by the same person, represents an excellent field for researches in palaeography (scribes, handwriting, identification of anonymous copyists, and so on) and codicology (ruling, decoration, binding, and so forth). The present project aims at identifying one of the features of the parchment used in the scriptorium, by measuring the thickness of the leaves composing the quires of each manuscript. The collected data have been subjected to a basic statistical treatment and compared with the (unfortunately rare) similar data, drawn from contemporary or older manuscripts.
€ 6,00
Presenze dimenticate (VI) digital 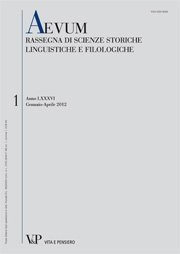 | AEVUM - 2012 - 2
Anno: 2012
SUMMARY: This is a new chapter of a survey aiming at identifying and describing all manuscripts written by women up to the fifteenth century. The site http://edu.let.unicas.it/womediev/ lists 222 manuscripts and 204 names, the overwhelming majority of which belonging to nuns. A general review of the state of the art is followed by the description of five German and Latin manuscripts (Munich, Bayerische Staatsbibliothek, Cgm 851, 5139, 5235; Clm 10930, 283331), all dated or datable saec. XIV-XV, and a much older one (Wu¨rzburg, Universita¨tsbibliothek, M. p. th. f. 45), written by a rather mysterious scribe Abirhilt somewhere in Germany during the second half of the eighth century.
€ 6,00