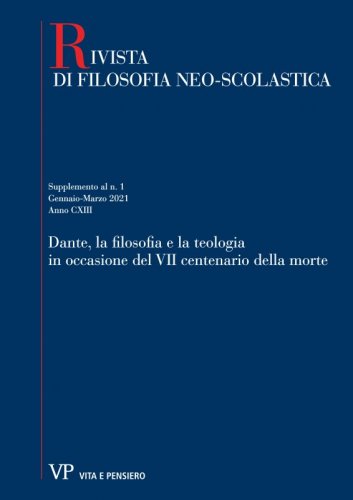 | RIVISTA DI FILOSOFIA NEO-SCOLASTICA - 2021 - 1 (Supplemento). Dante, la filosofia e la teologia in occasione del VII centenario della morte
Anno: 2021
Against the background of some unavoidable achievements of philosophical thought concerning the relationships between will, freedom and reason, achievements recognized by the critical tradition as operating in the Comedy, the contribution focuses on the central cantos of Purgatory, specifically on the relationship between the words of Marco Lombardo and Virgil’s discours on the free will...
€ 6,00
«...del mondo a l’altro lato»: Conversione e metamorfosi nella Gerusalemme liberata digital

| AEVUM - 2011 - 3
Anno: 2011
Analysing both the duel scenes and the witchcraft scenes (characterized by an action/ reaction pattern) and the route of Rinaldo towards the crusaders’ camp (intended as the way to conversion) by means of the figures of speech, we can perceive a recurrence of some figures which could have become representative both of the archaic world picture and of the Christian one. Anthitesis, chiasmus, anaphore, parallelism thus become the images of a sort of ‘‘poetic theory of metamorphosis’’ which reveals itself when magic forces or violence affect the action and which is complementary to the ‘‘poetic theory of conversion’’ already codified with reference to Divina Commedia. The latter theory shows forms that go beyond the fixed and repetitive structures of antithesis through the use of correctio and adversative formulas in order to symbolize the way to repentance and to spiritual growth. So Rinaldo’s journey becomes the illustration of that route which, in its rethorical devices and in the reuse of some themes, offers several similarities with the travel of Dante as a character.
€ 6,00